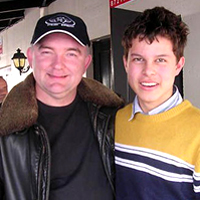 Broadly speaking, Parton draws influence from the likes of The Beatles, Queen, Jeff Buckley, Radiohead, Coldplay and Keane. He’s always been a fan of song writing that is simple, lyrically catchy, has strong chords and melodies, is impressionistic, easy to listen to and well produced.

Parton’s music however is heavily rooted in the jazz & swing era and since a very young age has always had a strong affection towards the genre. When he was as young as about the age of 7 years old, there used to be ritual where his father would put an old-school vinyl record on for him to fall asleep to each night. Parton distinctly remembers that one of the records in the rotation was Frank Sinatra’s ‘The Broadway Kick.’ It probably stems back to this point where Parton received his first taste of jazz.

He formally began to learn the art of jazz through his studies at Brighton Secondary School where he was introduced to the likes of improvisation, theory, harmony, history, small ensembles and big bands all centred around the jazz genre. Initially, Bill taught himself jazz piano however during his later years of secondary school, he was taught by local legends David McEvoy and Dr Chris Martin. More recently, Parton reconnected with jazz though deciding to undertake a Master of Music Studies (Performance) majoring in jazz piano at the Sydney Conservatorium of Music (University of Sydney). It was there where he enjoyed the tuition from some of the country’s finest jazz educators including Matt McMahon, David Theak, Simon Barker, Andrew Dickeson, Dan Barnett, Craig Scott, Kevin Hunt, Judy Bailey and Mike Nock. In terms of vocal training, Parton has always been self-taught until recently having sought the tuition from the great Charmaine Jones.

Contemporary jazz tends to be artistically and creatively cutting-edge. While it appeals to the hardcore jazz enthusiasts, it’s often misunderstood and regarded as ‘too cool’ by the wider audience (i.e. average punter and casual music fan). Parton however draws influence from the classic straight-ahead ‘middle of the road’ mainstream kind of jazz that has stood the test of time. This is a key reason as to why Parton has always represented a product that’s been commercially viable in that it has appealed and resonated with the wider audience.

Characteristics of jazz that Parton has fallen in love with are its hard tight swing grooves, its strong tasteful melodies, its juicy chord voicings, its smooth logical chord progressions, its crooners and the standard songs common to the Great American Songbook. In terms of of jazz pianists, Parton draws influence from the likes of Red Garland, Wynton Kelly, Hank Jones, Bill Evans, Teddy Wilson, Ahmad Jamal and Tommy Flanagan. In terms of jazz singers, Parton is influenced by a variety of vocalists including Louis Armstrong, Frank Sinatra, Tony Bennett, Harry Connick Jr, Jamie Cullum, Mark Murphy and Kurt Elling.

“I have admired his many talents as a pianist, vocalist and promoter in the field jazz. I have always found him to have a genuine interest and enthusiasm and professional” – Don Brow (Editor, Jazz Scene Magazine)

“Bill is proficient at the keyboards and is developing a distinctive vocal style, with a personality that is conducive to leadership and performance in public.” – Ron Spain (President, Southern Jazz Club Incorporated)